On The River Wye

This website details the course of the Wye, from Glasbury to Chepstow, listing campsites and public facilities along the Wye Valley. Click on the map below to enlarge. 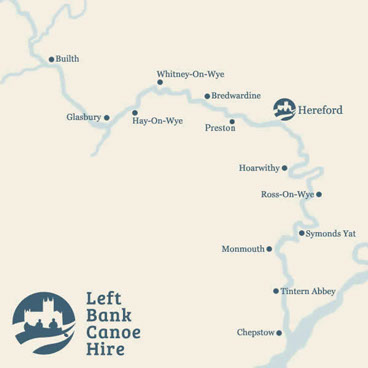 The first section of the river goes through Hay on Wye which is famous for it's many book shops and Hay Festival. The River Wye then continues through some of the best countryside the UK has to offer with breathtaking views of the Brecon Beacons and Black Mountains.

Crossing the border into England the River Wye travels on to Hereford which is steeped in History and takes it's name from being the lowest point of the River Wye "Ford" meaning crossing point,which was used by Army's as the forming point "Here". From the river you can see Hereford Cathedral and old battle grounds as you pass under Saxon and Victorian bridges. Hereford Cathedral is home to British treasure including the Mappa Mundi and Chained Library.

After Hereford the River Wye continues to Ross on Wye and like Hay on Wye these settlements got their names from being "upon" the River Wye. People that are familiar with these places tend to drop the latter part and commonly refer to them just using the first part.

Ross on Wye is an old market town. From the river, you can see the distinctive church spire soaring into the skyline. There are good public facilities next to the river including camp sites and places to eat and drink. 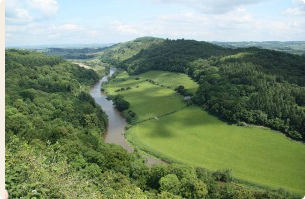 River Wye South, a great canoeing spotAfter a short distance the river passes Goodrich Castle, built initially in the 11th century. The castle was named after it's founder Godric an English Thegn.

The Castle is open to the public and has a newly built visitors centre that offers free audio tours. Goodrich overlooks Symonds Yat. Divided into Symonds Yat East & West, this scenic village in the Forest of Dean has riverside camping and hotel accommodation.After Symonds Yat the River Wye turns back towards Wales crossing into the Welsh market town of Monmouth.

Monmouth is home to two other rivers, the Monnow and the Trothy. It is also the birth place of Henry V and has many attractions and sites to visit. From Monmouth the Wye continues towards Tintern. From the river, you have a fantastic view of Tintern Abbey, referred to by many as the "Perfect ruined Abbey". The River Wye goes behind Tintern Abbey, giving canoeing groups a great aspect of the Abbey.

Warning: From here River Wye becomes tidal and groups with experienced paddlers should only continue with a qualified instructor.

The last leg of the River Wye stretches between Tintern And Chepstow, before joining the River Severn. Canoeing groups must reach Tintern by high tide allowing you to paddle with the out going current to Chepstow. On arriving you'll see Chepstow Castle high upon the cliff top, giving an impressive backdrop to the finish line. Once under the old bridge there is a pontoon to get off the river, with good access and parking close by.

Today Chepstow is best known for horse racing, but historically it was a walled town with a fully functioning port. Like all locations on the River Wye, Chepstow is a beautiful town with many visiting tourists each year. There are many hotels, B&B's and guest houses along with some fantastic places to eat and drink.

Stretches of the River Wye